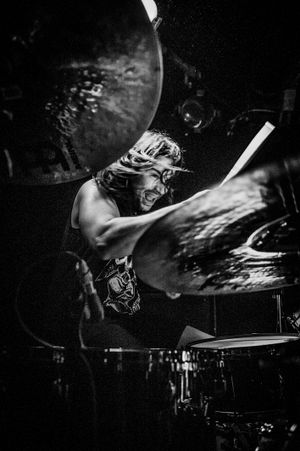 He is also the drummer for Converge, All Pigs Must Die , Kill or Be Killed.

He has also previously recorded/performed with Cave In, Acid Tiger, United Nations and many others. 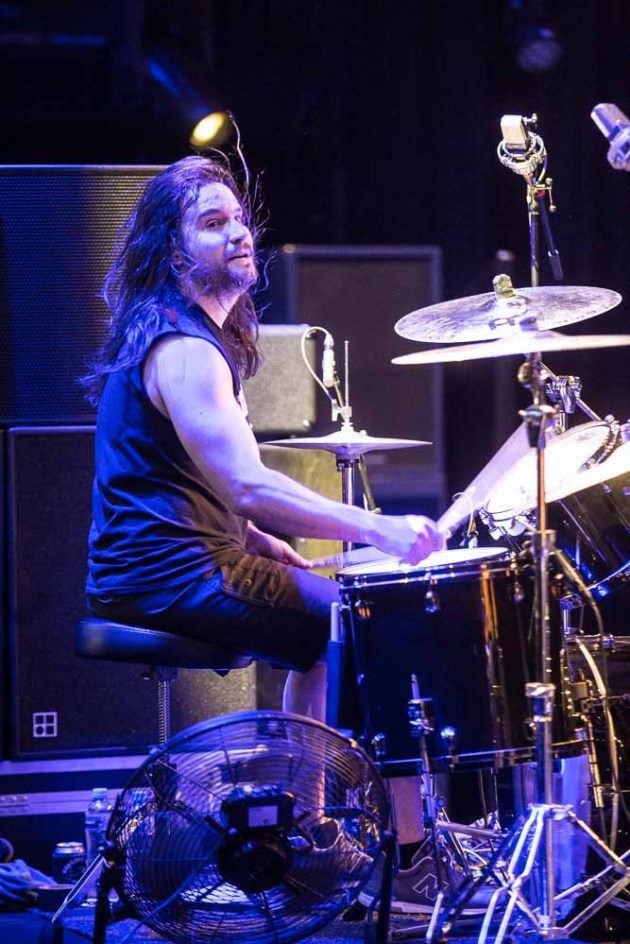 Ben Koller is one of the most prolific drummers in heavy music. In each of his bands—Mutoid Man, Converge, All Pigs Must Die, and Killer Be Killed—he’s a Swiss Army knife, playing a variety of styles with panache. One moment he’ll be blasting on par with Dave Witte, and then he’ll smoothly change to the lurching heaviness of Jason Roeder. Koller’s drumming has a feel that’s undeniably his own, which is rare in a world with so many mechanical players.

That feel has its stink all over Mutoid Man’s War Moans. The LP keeps the hair-metal- party-gone-wrong vibe of previous LP Bleeder intact, but it also delves into ballad and even pseudo-dance territory, creating an unshakable urge to headbang while doing the running man.

Koller sat down with Invisible Oranges to discuss War Moans and the things that have shaped him into the drummer he is today.

How do you see War Moans in comparison to Bleeder?

It’s probably a little more comfortable, as in being comfortable doing what we want and not having any guidelines. We wrote a wide range of songs on this one, and the production is definitely better. We allotted more time in the studio to make sure we were totally happy with the way it sounds. On Bleeder, we felt a bit rushed. We did the whole thing — tracking, mixing, everything — in about 10 days. That record came out great, and I’m really happy with it, but it almost felt like a second demo with better production. War Moans sounds more like a fully realized band.

From balls-out rock and thrash to the dance groove in “Kiss of Death,” it’s clear that Mutoid Man has a wide range of influences. But War Moans also has a cohesive feel.

I’d like to think that now we just sound like us — like Steve, Nick, and Ben — so no matter what styles we venture into on the record, we still sound like Mutoid Man, which is what I admire about bands like Dillinger, Mastodon and Baroness. It’s always unmistakably them. That’s what makes a band really special: you can immediately tell who it is when they start playing.

We didn’t have any boundaries when we were writing. When we were joking around about writing a ballad, we were like, “Fuck it, let’s do it.” We were listening to a lot of Emerson, Lake & Palmer’s “Lucky Man” and Mötley Crüe’s “Without You” at the time and just decided to do a ballad. Steve [Brodsky] busted one out pretty much in the next breath, which became “Bandages,” the last song on the record with Chelsea Wolfe and Ben Chisholm adding a little extra magic to it.

I like to say that Mutoid Man is a culmination of everything we’ve ever listened to since were 12-years-old: from the classic Metallica to our peers in Mastodon, Dillinger and Baroness, and just about everything else — punk, hardcore, pop punk, metal, and thrash. It’s all in there in one big soup.

When I think of Mutoid Man, I also think of Torche and Old Man Gloom, who make heavy music with a sense of humor.

It just naturally happens that we like to have fun onstage, and we like to joke around off-stage. We’re all big fans of stand-up comedy and good friends with Torche and Old Man Gloom. We have fun and like to show it, and I think it’s good for the audience. It’s not fun to see a band when they’re super uncomfortable and just plant their feet, stare at the ground, and try to play their songs as perfectly as possible. We like to improv, and Mutoid Man shows are a bit different every night because we take liberties here and there with songs. We try to keep it loose and fun and put on a good show for people.

How different is the writing process for Mutoid Man compared to Converge?

There are actually a lot of similarities. You just start with basic riffs and build from there: jam a little, demo those jams, and then listen back and fine-tune. Most of it starts with guitar riff ideas that Brodsky will send to Nick and me in a text message. He wakes up in the morning, plays guitar in his underwear, sends us riffs, and asks what we think. When we get together, we jam on those ideas and the songs evolve from there.

What’s one of your favorite songs to play from

Probably “Kiss of Death” because it’s a slow creeper. There’s not a whole lot of super fast stuff on it, so you can really lay into it. That song and “Date with the Devil” are similar in that way. It’s more pocket playing rather than overplaying, which is more of what I’m used to. Venturing into pocket playing is getting fun for me, which I wasn’t that into in the past. I love the songs where I can just find a groove and use the Chuck Biscuits and John Bonham caveman approach—but where it’s a caveman that’s pretty good at geometry and algebra. A metrosexual caveman.

When did you start playing drums, and did you take lessons?

I started playing in about 1992, when I was 12. I had a drum pad first, and that was a drag, so I had to figure out how to get a kit. Then I got a really crappy drum kit with mismatched brands, but I didn’t care because it was something to bash on. I took lessons from a couple guys for a few years, like this little Italian guy named Philip Vitale, who was a Latin and orchestral player in the Cape Cod Symphony Orchestra. He had a huge impact on me. He was kind of a nut, as a lot of drummers are. He would coach me on rudiments, and, to get me to play faster, he’d smack my hands with a drumstick, trying to motivate me in a funny but painful way.

I played all I could in high school. I was in concert band, jazz band, and elite jazz band. I also played in the pep band at basketball and hockey games, a Blues Brothers cover band, and three or so bands with my friends. I did everything I could to play as much as possible, because that’s all I wanted to do.

Who are some of the drummers who have influenced you the most, and what have you taken from them?

John Bonham and Dave Lombardo are two of the biggest ones. Bill Stevenson had a huge impact on me, because The Descendents and Black Flag were the first punk bands I listened to. I definitely incorporated that super-fast right hand surf style when I started playing in punk and hardcore bands.

Drummers from my first local shows probably had more of an influence on me than anyone. When I was first learning, I was going to a ton of shows and playing as much music as I could. I was in awe of every drummer I saw, even the ones who turned out to be not so good in the end. Nick Branigan from Bane was the first drummer I ever saw play a blastbeat when he was in Rise Again a million years ago. I had never seen a blastbeat before, and I was just in shock. I immediately went home and tried to figure it out. And again, I’m a huge fan of that Chuck Biscuits, chopping-wood style, but then combining that with the finesse of Keith Moon and John Bonham.

What was the first real band you were in?

That would be a band called Where’s Ben? We went to an open mic night at Cape Cod Community College to play our first show. When we were supposed to go on, I was at Taco Bell and didn’t make it, so we called the band Where’s Ben? We were a pretty bad pop punk/hardcore band. We had a song called “The STD Song” about chlamydia and gonorrhea. We listened to a lot of bands that mixed pop punk with hardcore, like Good Riddance, Suicide Machines, Strung Out and The Descendants—bands who played blazing metal riffs but were mostly pop punk.

Can you describe one of the worst shows you’ve ever played?

The first one that comes to mind is this festival that Converge played called Zwarte Cross in Holland in 2010. It was a huge extreme sports festival with dirt bikes and crazy stunts. We were basically the side show, and it was us and Papa Roach. Around 200,000 people were at the festival, but only a couple hundred people decided that we were worth their time. We got lots of sideways looks, and it was just really weird. Sometimes you take an offer for a festival and wonder why the hell you’re there. You just get up, punch the clock, do your job, and get off the stage. But sometimes those shows are the most fun because it can make you try harder to get a reaction out of people. You can get a little more loose because you think it doesn’t really matter, and sometimes it makes the show more energetic.

If you could do a collaboration with any active drummer, who would it be and why?

Probably my friend Chris Maggio, who was in Trap Them, Coliseum and Sleigh Bells, because he’s as much of a kook as me. We could start a band called Ludicrous Speed and just face each other’s drums and try to blastbeat each other to death.

I’ve always wanted to start a drummer podcast and just shoot the shit with all my drummer friends. Maybe one of these days I’ll get it together.

You’re one of the rare metal drummers who has a totally distinct style. Do you have any advice for drummers when it comes to developing their own feel?

I think it’s important to play what you love and play a lot, and not necessarily practice to a metronome in your bedroom for a million hours, unless that’s what you love. For me, I was always just into jamming with my friends as much as possible and keeping my chops up that way—being a band drummer and not a clinical drummer.