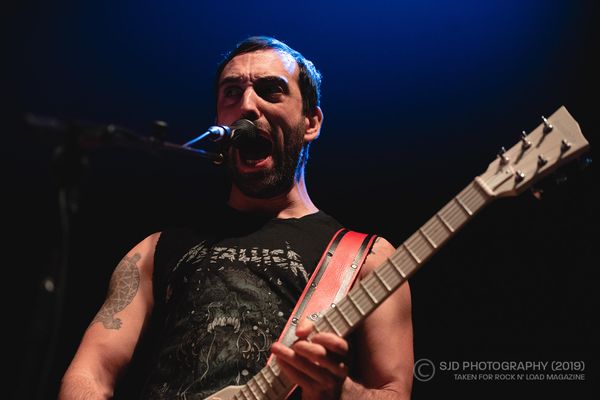 kick off proceedings to a modest crowd, happy to have the few in front of them they launch into one of the most brutal and visceral performances Norn Iron has witnessed in a very long time. By the end of the 1st song the few were many and the many were in awe! This trio laid down and gargantuan sounding soundtrack that shook you from the ground up, possibly the loudest gig in the Ulster Hall since the hayday’s of Motorhead, these guys played like they were headlining banging out killer riff after killer riff and winning over the Belfast crowd with each and every single track. Their first three tracks were over in a flash, a gnarly and savage sound pummels the crowd below whilst Mutoid Man throw out a performance as if it were from the depths of hell. Both guitarist and bassist are adorned in Flying V’s wailing away as they give each other the finger, an epic start to a hefty and riff-tastic evenings entertainment.

Mutoid Man will be joining Mastodon and Kvelertak on tour in 2019 - tickets on sale this Friday, Oct 26. Full Mutoid Man tour info HERE

Back at the Vinyl Stage Mutoid Man put on what can only be called a star-making performance.

Mutoid Man will be playing with Power Trip November 2 at The Rebel Lounge in Phoenix, AZ.
Tickets HERE

Last night was one to remember at Brooklyn’s iconic heavy metal club, Saint Vitus Bar, as Kerrang! curated and sponsored its first ever show in the United States.

Headlined by New York’s Mutoid Man (featuring Stephen Brodsky of Cave In and Ben Koller of Converge), with support from Ruby the Hatchet of Philadelphia, and The Well of Austin, Texas, the evening was filled with fuzzed-out heavy riffs and whiplash-inducing head-banging.

Guitarist/vocalist ,Stephen Brodsky, in this month’s issue of Kerrang Magazine.